Wonder Woman is a success! Doctor Who is a woman!

And there are certain segments of the population that still aren’t happy. Wonder Woman wasn’t buff enough! Doctor Who isn’t a woman of color. Instead of celebrating that a female led superhero movie is inspiring little girls everywhere and making huge amounts of cash at the box office or celebrating after 12 incarnations of white men, the thirteenth Doctor will be female! These are things to be celebrated. It means, we hope, that the fact that 50% of humanity is female and we want our stories to be shown is making an impact on the minds of folks in media. That women can be just as successful as men as action heroes and leading roles.

There still is a long way to go. Women are still hypersexualized more often than not. They are held to higher standards than men. They’re still regulated to roles that are more stereotypically considered female instead of leadership positions. It is still a step forward. And I don’t think that step should be trashed for not being big enough.

END_OF_DOCUMENT_TOKEN_TO_BE_REPLACED 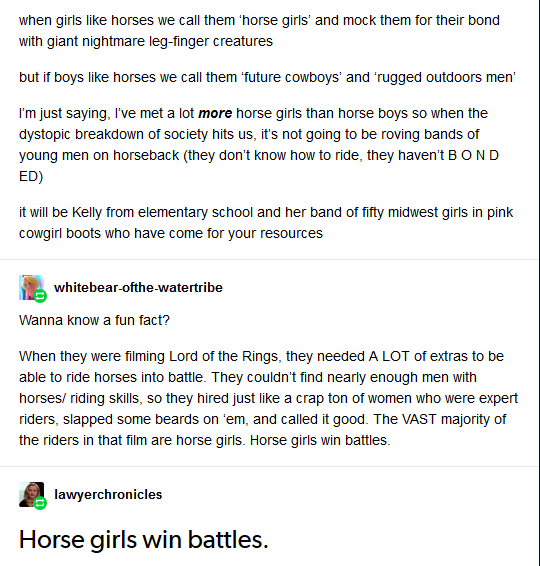 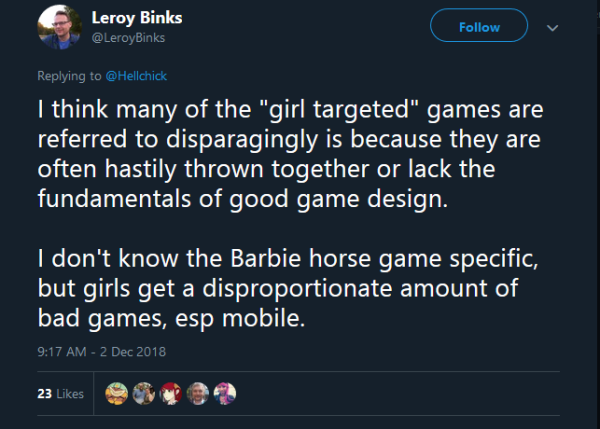 END_OF_DOCUMENT_TOKEN_TO_BE_REPLACED

Time for some delving into our decision making paradigm here as I address what is sure to be a question we get a lot, and while I’ve touched on it, I really want to talk about it in-depth. Why did we decide that the player character in Mystic Riders had to be female?

I’ll get the mechanical aspect out of the way: yes, it is easier when you are going as highly-customizable as we are to only do one physical sex. Especially because we are doing three different body types, and lots of different hair styles and options for personalization and style choices (even if we are limiting how many are available at release and adding to them as the year goes on). By eliminating having the option to play as a boy, we’ll be able to make the player characters that more variable with the same amount of time and resources that normally go into supporting both physical sexes.

Since you can easily twist the mechanics into an argument for why we should do a male option, let me go into the marketing side of it. Our age demographic is 10+ girls, ideally 12-16. Those girls are going to want to play as themselves, to be as much like they either are or want to be. Our job as game developers is to cater to that market. Particularly because it is wildly under-represented. There are very few, high quality games with a female only protagonist that can be customized beyond using your own name. About the only two games I can think of that fairly let you play as male or female for that age group are Pokémon and Wizards 101, and they have to limit how much customizing you can do because of the engine’s ability to handle it all.

I use the word fairly in two senses: one, there are (roughly) the same number of options for both the male and female players, and both are presented in the same way. Counting the number of hair styles is easy, it’s the second that trips developers up. The female character has to have to have the same variety of options as the men–this means that they can’t be designed to only appeal to the male gaze. (I have heard the arguments that the overly buff men are supposed to be for the female gaze, I am here to tell you it’s garbage. It’s a masculine fantasy all around, folks.)

One common complaint you’ll see, even in female-forward games like Overwatch, is that the faces all look the same for a female character, despite different nationalities and body types, but the men have at least a nod towards diversity. By focusing all of our efforts into female characters, we can avoid those types of slips and actually bring true variety and diversity to the options for characters and for NPCs. We can also feature interesting fashions without presenting teenage characters as a lot older than they are and creating unrealistic expectations.

Which leads to the moral and emotional reasons why we want to focus on a female character. I grew up with Zelda and Mario, both rescuing princesses. Pokémon: Crystal and Final Fantasy X, my first games with female protagonists (or close to it), didn’t come out until I was already ten or eleven, and I’m younger than Ginny! And while games have worked to include female options for characters, there still aren’t very many that focus entirely on a female protagonist, even as other games such as Zelda: Breath of the Wild and Red Dead Redemption 2 focus on male protagonists entirely. (I’m still annoyed we haven’t had a playable Zelda yet when she is the name of the franchise.)

Girls have just as much right to be the focus of a prophecy or the hero of a story. But they don’t get that opportunity unless it is alongside a male option. We want to create a game where the focus is devoted to showing that a game like this is possible, rather than feeding into the loop that girls won’t play games even if you create a game for them. It’s the same study they tried to feed us about female super heroes, and Wonder Woman blew them out of the water, and Carol Danvers is showing signs that she might do the same if given a fair chance.

That’s all Ginny and I want to do, really. Offer a fair chance for girls to be the heroes of their own stories, offer the type of games that we all enjoy without fighting through pop-up ads and bad graphics. By proving them wrong once, we give a foothold for others to try, and for us to keep trying and pushing for more. Because if all of us succeed, the ones who really benefit are the girls out there who start to believe that they can do what they dream.

“… It’s such a tough time of life for girls being a tween. They suffer from a lot of difficulties. One of the patterns we saw over and over was a sense of social inevitability about what happened to them that you have to work to get over as a young girl. We learned a lot of things about social status and play patterns and things and it then became more my mission to create emotional rehearsal space for a lot of different types of girls to get over that hump of being a kid and being a teenager. And we were really interested in recognizing and representing the diversity of the girls that we interviewed.”