We keep mentioning our wonderful districts, so now we’re going to start introducing them. Astranar has eight districts, each with their own individual flare, and they can be quite competitive with each other. In Astranar, the districts are named after gemstones. This week, we’ll be discussing Citrine (the gemstone, not citrus fruits), where Fire magic sparks the imaginations. 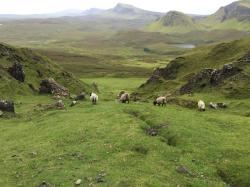 Continuing the hill country with a few plains mixed in instead of forests and gorges, Citrine is on the southeast side of the country with coastline, and sharing a border with the Diamond, Ruby, and Sapphire districts. The point of inspiration from Ginny was Scotland. Not just the moors, but also the lochs and woods rather than full forests. While water isn’t as plentiful here as it was in Ruby, there are a few stand-alone lakes and streams. The grasslands of the moors seem to stretch on and on at times, with hidden hills creating surprises around corners. There is some hard pebble type beach shores, but a good portion of the coastline is also jagged rocks and steep cliffs.

With the sweeping plains of grass, most of the “farming” that happens is that of animal husbandry, though some grow grains or nightshade variants like potatoes and eggplant. A wildcat sanctuary is kept among the hills, where a wide variety of big and small species of wild cats have a safe place to live and education on conservation can occur. They even have a traveling group that rarely has orphaned kittens they could use some help raising. The coast is home to plenty of fisherman who scour the sea for bountiful seafood, while the vineyard does its best to compete with the other districts.

The local nobility is small, with their presence not being felt much. A count, a baron, and a few lords and a knight, they could use a reminder on how to socialize with each other and with the populace. Perhaps because of having lots of space, perhaps because Citrine is so close to Diamond District, but no matter the reason, Citrine has plenty of flourishing dance studios and other types of training that performers dream of. It fits with the creativity and passion that is used to combat the sameness of the view and weather. The fashion reflects this, with some hip-hop inspired styling that somehow manages to make it work with the gothic aesthetic.

Sweep hills of grass are great for not only cattle, but horses. Specifically flat-style racing, which is all about speed and endurance. The horses that are collected here reflect the more tumbling sides of speed. The Brumby, the Camargue horse, and the New Forest pony all make their homes here (or rather, their breeders do), and they are sure-footed to help if you need a new horse for speeding through the flats. Please note, the expectation is that the game will provide you funds for two extra horses in addition to your initial horse, one of which includes a pony. This is not the district that supplies you the credits for purchasing one.

Fire magic resonates with Mi on the solfege scale. It’s all about the creative energy and passion for life. Fire-inclined people are energetic, brave, and vivacious, with personality just oozing out of them. They can’t help but show their creative personalities, being very assertive and strong in themselves. On the small scale, Fire magic can light a candle or a campfire, making a matchbox or tinder a theoretical exercise. On the large scale, it can be a purifying force, as well as provide inspiration depending on the spell. The downside is that an irresponsible or out of control spell can lead to a raging forest or grassland fire faster than you can sneeze.

If you following Ginny’s twitter blog, you’ll know that all of the districts, including Citrine, have their own little specialties and symbols. I won’t bore you with all of them, and I want you to get to enjoy finding them out on your own! (The name is one giant clue to one of them, fyi.) I will mention that the Citrine mentors depend on which side you choose. If you go with the Light, you will look to Vivienne Streetbeats (profile pending), and if you go with the Shadow, you have options: Vivian Streetbeats (profile pending) and Veronica Highflute (profile pending).