The only American draft breed still in existence, the American Cream Draft came to Astranar as part of a breeding program to help increase its numbers and chances to continue survival. It is one of the options for the player to purchase a draft horse, though it isn’t available in the same district that supplies that quest.

Primarily descended from a mare named Old Granny who consistently threw foals who looked like her that 98% of the breed can trace their lineage back to, the American Cream Draft is famous for their coats, named “champagne gold” or “gold champagne” depending on who you talk to, passed on by the champagne gene in sorrel or chestnut horses. Refined heads that are flat, rather than concave or convex, wide chests, and strong, well-proportioned builds are other hallmarks. They are regarded as sure-footed horses that are eager to please, making them excellent horses for first-time draft owners.

The Great Depression in America and the industrialization of farming threatened this breed’s survival, however numerous breeding programs have worked to keep the breed alive and are working to increase the numbers Astranar, always one to jump at the chance for breed conservation, eagerly volunteered to help programs with building up bloodlines. With their strong and hardy natures, they also listen to directions well, letting them do well at show jumping and also helping with the forestry in Sphalerite District. 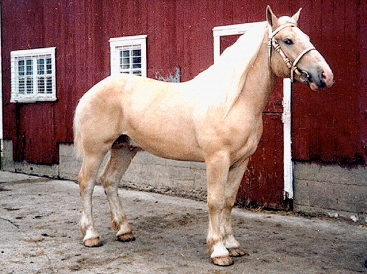 Breed Characteristics:
American Cream Drafts come in limited colors by nature of the breed. They only come in light, medium, and dark champagne, though the occasional rare sorrel (red with blonde mane and tail) may appear. Unlike with other breeds, paints aren’t likely to occur, but other markings are still welcome.

* Note, these numbers aren’t set in stone. They are Becca’s way of trying to reduce her knowledge/research of breeds and their particular skills and traits into numbers so when animators and programmers have to look at these horses, they can go, “Oh, this horse can’t turn worth beans but this one can on a dime, noted!”